It’s been awhile since I last posted and several of you have been wondering “What’s happened?” The simple answer: Busting my a--, heh heh.

As always, I am working on developing my mediumship abilities. Part of that work was taking some amazing training with internationally renowned medium Lisa Williams. The bestselling author and host of the former television show Life Among the Dead really put me back to square one with examining, redefining, and then re-igniting the mediumship flame. It started as a four-week online course complete with homework that really took me back to the nuts-and-bolts of communicating with the Other Side and how that communication takes place.

At the end of the four weeks, I and my fellow classmates from around the world (about 40 of us) all gathered together in Los Angeles for a full weekend intensive with Lisa. The finale of the course was doing two separate one-on-one readings for members of the general public who she had invited. Throughout the weekend, Lisa was taking notes on each of us – grading us like a proper instructor – and then had the general public grade us as well! Can you say “Pressure”? (Fortunately, I PASSED!)

To say the weekend was intense would be an understatement. First off, to be accepted into the course, we had to submit an application and hope our credentials as practicing mediums were enough to be accepted. When I arrived in L.A., I was excited, but when class officially got started – I was terrified! Here I was, sitting in a room filled with other practicing mediums who had already proven themselves simply through the application process and I was going to be graded by one of the top mediums in the business. I know I was not the only one feeling like a fish out of water, but there’s always a part of you that says “Really? Me? Do I really belong here?” As the weekend progressed, this fear diminished, but I have no shame in admitting – I had a couple panic attacks at the beginning!

By the time Sunday came and we were scheduled to do the readings with the public, everyone had bonded as a group and our initial fears had subsided. We all were going through the proverbial boot-camp together … and surviving.

Lisa was incredible – not only as an instructor, but as a down-to-earth human being in addition to being a medium. She understood and honored our fears and doubts (and moments of lunacy) that we all experience in doing this work, especially within the intensity of the environment we were training in.

Indeed, one of the great take-aways from that weekend was the realization that everyone – all 40 students and our instructor – never competed or felt that we needed to ultimately prove ourselves to one another. There wasn’t one of us that felt we had to “outdo” or “outperform” a fellow medium for the sake of our personal ego.

In the end, the course simply wasn’t another workshop, it was a literal journey of discovery. Lisa’s compassion and authenticity continues to carry forward in many different ways for each of her students -- and I am delighted to return to Los Angeles come October to get more training. I am also excited to see that many of my fellow mediums from this original class will be returning as well! It will be a grand family reunion!

Back here at home, I have taken what I’ve learned and acted on it – booking more public demonstrations and private home groups, with more to come in the next several months. 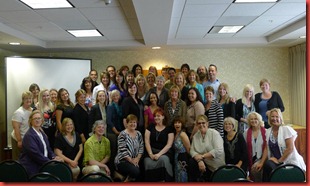 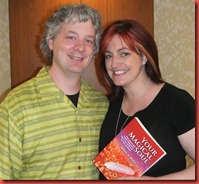 But … I am not done yet. I have also begun putting together the marketing and promotion for my next book The Afterlife Interviews, Volume I, due out this August. The book is the culmination of nearly 2 years of research where I conducted fourteen separate readings and asked the spirits who came through for my clients the same fifty-two questions about the nature of the Other Side. The result is a huge well-rounded portrait of what the afterlife is like from those who reside there. This has been such a huge project that it equally deserves a huge marketing and promotional effort, which is another reason why I have been so silent in my blog. The Afterlife Interviews is going to be nationwide (and potentially international), so it requires a lot of focus and attention leading up to its launch.  All this right on the heels of my first book Your Magical Soul receiving a silver medal in the 2012 Nautilus Awards in the Science and Cosmology category (previous Nautilus winners include Gregg Braden, Caroline Myss, and Deepak Chopra) as well as being one out of three finalists for the Body/Mind/Spirit category for the Benjamin Franklin award. 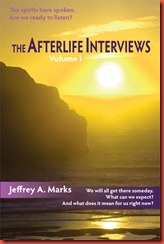 Along with the continuation of the Explorers of Consciousness radio show and the NW Mediumship Association, other classes (and gasp) regular day-job, I am one busy cookie! And then on the heels of The Afterlife Interviews will be my first fiction novel, The Resurrection of Osiris. Whew! To make all of this happen, I have had to push “pause” on doing individual one-on-one readings and paranormal investigations. However, if people are interested in receiving a one-on-one reading, I am creating a waiting list which I will jump on as soon as time opens up.

So if you’ve been wondering why I’ve been silent in the blogosphere, this is it! Training, books, presentations … With more to come!

Posted by Jeffrey Marks at 8:25 AM No comments: