I have never done a book review before, but just had to do it for a tome I finished two weeks ago.  As many of my friends know, one of my hobbies is studying the history of parapsychology – in particular, Victorian-era psychical research and the mediums that were investigated.  My favorite medium from the period is Leonora Piper (1857-1950).  She came to prominence in the 1880’s – a demure Boston housewife who unwittingly became a trance medium quite accidentally after visiting a medium herself.  While in the presence of the medium, she lost complete consciousness, only to find out later she had been taken over by spirit.  Her mediumship was something which baffled her and she relented to tests most people would run away from in order to understand it and further the cause of psychical research.  Some of the things she had to deal with from researchers ranged from being followed by private investigators to see if she was gathering information about potential sitters fraudulently; she was denied sitter’s real names and instead introduced by pseudonyms; she was even harassed by some investigators who – while in trance – pricked her skin and scorched her tongue with acid.

The book “Resurrecting Leonora Piper: How Science Discovered the Afterlife” by Mark Tymn took on Piper’s mediumship from the standpoint of a lawyer arguing a case in court.  Now, I’ve read quite a bit on Piper’s work, but what made this book really stand out was that Tymn no doubt did his research.  He quoted the actual transcripts from various cases, as if we were right there in the room during the communication.  He then followed up with how the sitters responded and cross-examined the data points allegedly brought through by the spirits.  Through this lens, the author effectively argued against the typical accusations charged against Piper’s authenticity.  By careful consideration, Tymn was able to show that the supernormal information she received was not a form of ESP with her client, or SuperPsi (information from a cosmic mind) or anything representing fraud.  He followed her career from when she first began, utilizing a spirit control named Phinuit, then through the years of the Imperator regime, moving between trance mediumship and automatism -- allowing the reader to be a part of Piper’s evolution as a medium.  Other authors have outlined this same evolution, however it has usually been a dry and academic description, whereas Tymn brings a sense of humanity; a person who developed as a result of her condition and the demands of spirit.

The other thing which really made this book stand out was that the author went into far more detail about cases already known about Piper’s mediumship, such as George Pellew and the Cross Correspondences, yet he didn’t stop there (as most pro-mediumship authors do).  He found several other noteworthy cases in the transcripts and cited them to again demonstrate the likelihood of spirit interaction as being the best evidence for the information she had received.

But like any good lawyer, he was aware that not every sitting Piper conducted was a success.  As a practicing medium myself, the gem of the book came when the transcripts revealed the spirits explaining why communication wasn’t always easy – and why it sometimes out-and-out failed.  First, the information was introduced through George Pellew, a man that as a reader, we only knew was an acquaintance of Richard Hodgson, Piper’s investigator who researched her for 18 years.   Yet when Hodgson unexpectedly died and starting coming through Leonora a week after his passing, we began to see what the stumbling blocks for spirit communication were and still are today – plus, we are emotionally tied to Hodgson, having direct knowledge of his work with Piper.  As Hodgson’s spirit gained more ability and thus more confidence in communication, he was able to explain the difficulty from the spirit’s point-of-view.  This has helped me in understanding the two-way street that we as mediums drive on when linking with spirits.

The finale for spirit survival was when Tymn talked about (if only briefly) the Cross Correspondences.  This has got to be the most ignored or covered up piece of psychical research in history that – for most of the scientists who studied it – was scientific proof for life after death, based on the evidence.  Here, we have several cases where three (or more) mediums located thousands of miles apart from around the world (separated by oceans) received cryptic messages from the same spirit (or spirits, depending on the case) that only made sense once all the fragments were combined.  It is considered highly suggestive, if not definitive proof of intelligence surviving death.  In one case, the investigator requested the spirit of psychical researcher FWH Myers to draw a particular symbol when coming through the other mediums involved in the correspondence – which the spirit of Myers did accomplish.

After reading this book, I am so amazed that the information is not more widely known.  The mediumship of Mrs. Piper turned many a skeptical inquirer -- physicists, psychologists, and lay-persons alike -- into believers.  William James, arguably considered one of the pioneers of modern psychology, considered her his “White Crow,” meaning that it only takes one white crow to prove not all crows are black – demonstrating that psychic and mediumship abilities can exist within the human condition.  Tymn convincingly demonstrates that there was no other explanation for the details and personalities that came through Piper other than spirit communication.  For me, Piper demonstrated details to a much greater extent than some of today’s most accurate and notable mediums and it baffles me that we still wrestle with the question of “Is it real”?

Resurrecting Leonora Piper, if presented in a court of law, clearly answers that question in the affirmative. 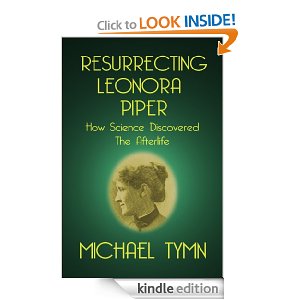