Native American Blessings from the Gorge 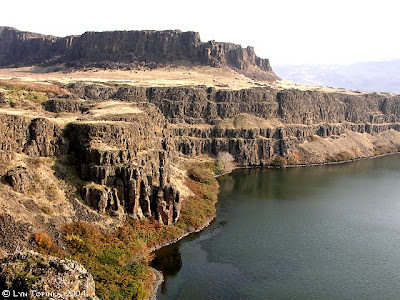 A few weeks ago, my wife and I took a visit to see my parents in the lower Columbia Gorge. This is quite the magical place, as it used to be the home for Native American commerce and villages for generations – spanning 10,000 years. Today there are only scarce remnants, mainly petroglyphs and tales from Lewis and Clark’s journey, as a good portion of the Native areas are now under water due to the many dams placed along the river’s course. However, there are a few places which still radiate with the majesty of sacredness throughout the centuries. One of these spots is Horsethief Butte, a megalithic outcropping of basalt stone rising hundreds of feet above the river. An excellent place for rock climbing, the Butte is actually more of a horse-shoe shape, where you can hike into its interior and be surrounded by the essence of the centuries. There a few places marked for their prehistoric value, as the faint lines of ancient ochre breach the stone where artists had painted homage to the sacred so many moons ago.

It was the perfect place for the blessing of some new stones.

My wife, Heidi, has just recently taken up study in shamanism – but has always been an avid collector of stones and their metaphysical meanings. We brought a new batch to the Butte to baptize them in the holiness of site, and to hopefully catch a glimpse of the spirits that no doubt once called the Butte “home.”

Heidi began the opening prayer by addressing the four winds and their respective totem animals, while I stood alongside snapping photos and opening up to see what would happen. As she called out the invocation, I could suddenly sense the presence of being watched. In no time at all, my senses picked up on several Native American spirits looking down on the ceremony from high atop the Butte’s upper edges. I spotted a chief, a shaman, a warrior, and an elderly woman, but was also aware of others. 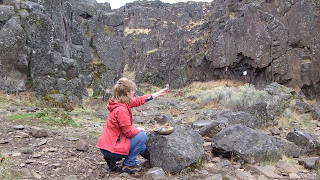 As Heidi lit the sage and waved the smoke over the stones, the spirits joined in a circle about her and I saw them encase the bowl with light from their bodies. They were, in essence, dowsing the rocks with the sacredness of their own spiritual energy, giving more to the stones than what Heidi had originally intended -- She had wanted to capture the eternal essence of the space and connect these new stones through a ritual of entanglement with the location and received so much more than that – an honorary blessing from spirits who had walked upon the great land through the course of history. 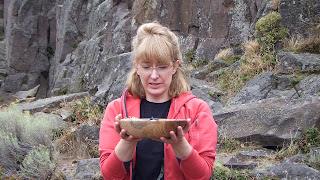 After she had closed the prayer, she asked me what I had picked up, mentioning that even she felt a “thickness” surrounding her. I told her about the people I saw, but then she inquired of any totem animals. Surprisingly, I did sense one, and the closer I examined the energy, it revealed itself as being a cougar. When Heidi researched the meaning this totem, it was amazingly appropriate and an excellent source of validation not only for what I was picking up, but for the accompaniment of all the spirits that had appeared.

“The cougar teaches decisiveness in the use of personal power … The cougar can teach you how to bring out your power and fill your heart with it in a manner that will enable you to take charge of your life.” – From Ted Andrews Animal Speak

The nod from these Native American spirits and the gift of their energy permeated the entire Butte as we climbed to the top of the basalt towers and marveled at the majesty of the river. Days later while we sat in our Development Circle at home in meditation, I was visited by the Chief who stood watch over the ceremony that weekend in the Gorge. He blessed me with some encouraging news regarding our work as spirit messengers. I didn’t know it at the time, but Heidi had prayed that someone from the Butte would show up during the Circle.

If you ever get the chance, take a trip to Columbia Hills State Park and trek out to Horsethief Butte. You don’t need to be psychic to encounter the sacredness of this location which hosted generations of Native dwellers for nearly 10,000 years. With respect, ask and the spirits will appear. 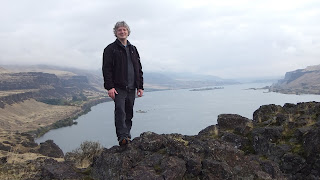 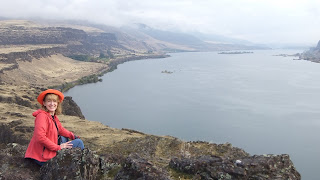 The Draw of Earth from Spirits

When paranormal investigators enter a location, it is usually with the idea that if the place is truly haunted, the ghosts must have either died there or are stuck. It conjures up the image of a person locked in a prison cell, and because of the nature of this incarceration they are acting out in anger or frustration, thus the haunting activity.

A place isn’t haunted necessarily because a spirit is “stuck.” When I have gone on investigations with the Washington State Ghost Society, I have discovered that some spirits so enjoyed certain locations, they have chosen to remain behind at will. And since they are no longer affected by Time, is it not possible that the energy of certain locations can become saturated with the vitality and joy “spread out through Time” yet concentrated in potency from the hub of eternity that locations can become “hot spots” for spirits?

When we have investigated old theaters and pubs, we usually discover a high concentration of spirit activity. That is, it’s not usually just one or two spirits hanging around, it can be several dozen. We’ll capture their voices in EVPs, potential images as strange lights or orbs in photographs, and no doubt someone always walks away with a personal experience of either being touched or hearing something – such as knocking or footsteps. Upon interviewing these souls, the spirits reveal that they had such fond memories and good times at the place, they just love to hang out in the location.

It is a common perception that if a spirit is tethered to a locale that they have not traveled through the light and really made it to the “Other Side.” This, too, may actually be a misnomer. This last weekend, my wife and I were hiking a trail up at Mt. Baker when I heard the jingling of what sounded like jewelry. I thought it might be someone following behind us, just around the bend. But no one ever showed up. A few moments later, another pack of hikers crossed paths with us, going the other direction. As I knelt down to snap a photo of the scenery, I keenly felt a presence behind me and heard the scraping of gravel. I instinctively peeked to see if it might have been a person from this other party. It wasn’t, for they were already a good three or four yards behind us – much too far to have heard those feet or felt that presence. When I stood up and continued down the path, I knew I was being followed by a spirit.

When I told my wife about it, she asked who it was. I had wondered if it was a Native American, but when I asked, I clearly got “No,” and was shown the image of a park ranger. He showed me his brown fatigues and told me he used to work here; that he really cherished the environment of the mountain and loved to view it often. When I passed this information on to Heidi, she wondered if he had died there or if he had made it to the Other Side. The answer the spirit told me was that he had fully crossed, but that doesn’t mean he couldn’t come back and visit. Which may be exactly what is happening at other haunted locations.

Modern day research into remote viewing has demonstrated the capacity of the human mind to transcend the body and go anywhere around the world. Those who have had out-of-body experiences share the same ideology – they can go anywhere by thinking and feeling about a location. Why would it not be possible for someone who has already shed the physical body to transcend dimensional barriers in a similar fashion? In some ways, I think it would be easier.

Since spirits aren’t confined to a particular Time, it appears they can choose to occupy a particular Place, if they wish. And even though we might think such occupancy would hinder any chance or opportunities for growth (or otherwise make us feel isolated), what we have failed to consider are the emotions attached to the spirit’s consciousness – the whole reason they are there at all. Trapped? Hardly. Joy? In some cases, definitely.

I would also postulate that because a spirit is not confined to Time, the potency of an environment may be vastly more enjoyable from a non-Time symmetry than a single linear moment point. Using the Mt. Baker trail as an example, imagine eighty or so years of people saturating that trail with positive emotions from their travels along its paths. From a linear perspective, that energy impresses the environmental field only for the amount of time the people are participating; however, from a non-time perspective, that energy and feeling is eternal. In other words, it’s permanently “recorded” in the environment. And when you compound years of energy and emotions onto a single location without the construct of Time – WOW! Imagine what that must feel like … Eighty years of joy and happiness from hikers, skiers, and other outdoor enthusiasts – soaked up like a sponge and fully accessible to the non-Time eternal consciousness. The draw of such locations must be awesome.

And maybe sometimes a house.

Compounded energy of joy would certainly compel me to visit a location back here on earth – even if I have already Crossed Over. And I think the more we study and speak to our friends in spirit, the more we are realizing that just because they have died and gone to the Other Side doesn’t mean they aren’t allowed the choice of a Visit.

(If you’ve ever visited an old Cathedral or Holy Site, you can get a glimpse of what that compounded energy somewhat feels like. I wonder what those places feel like to a spirit, as they would have much better “access” at the energy level than the filtering system of our physical bodies.)

Oh – and the jingling I heard, I think it was from the ball-bearing in the ranger’s whistle that he used to wear while he worked.

By contrast, is it possible that some places harbor a compounded history of negativity that it might attract “lower” spirits? Could compounded negativity also be an attractor for eternal beings? I think so, but I don’t want to talk about that right now. I’d rather consider the draw of such places as the Great Pyramid or a luscious waterfall.