My Week With James Van Praagh

For everyone who knows me, I am always on the look-out for new styles and techniques when it comes to working with mediumship in an effort to become better and more valuable to my clients. It was for this reason that my wife and I signed up for James Van Praagh’s week long “Mastering Mediumship” course in Laguna Beach, California, which we attended last week. Going in, I had no idea what was going to come out of it, just that I would get to hear and pick the brain of one of the world’s most renowned mediums.

The course far exceeded expectations. On day one, we were already being asked to partner up with strangers and do basic telepathy tests. By Friday, participants were performing demonstrations of mediumship with the group. Imagine standing in front of a crowd of about 100 people and being asked to receive information from a person’s deceased friend or relative, without knowing off-hand who that would be. It was amazing to watch people make such miraculous connections! “He died at 57; His name was John.” Information like that came through from people who, when starting the class on Monday, had no idea they could pull it off come Friday. (Yes, I did my own group demonstration, too. At first I was extremely nervous, but when things started to flow, I just did what I have taught myself to do – go for it. James commented with a smile “You’ve done this before.”)

Another reason I attended was to find out for myself just where I stood in terms of ability with my mediumship skills. I received such warm and wonderful compliments by several participants, as well as James himself. It was definitely a shot in the arm with great encouragement to continue.

There were several exercises that challenged everyone to discover how to communicate with spirit. Since everybody has different styles, the exercises addressed multiple different ways of dealing with the energy in the hopes of understanding its qualities and the messages that would come through. I certainly learned more about my own style – what works and what doesn’t.

My wife and I also met other fabulous mediums who had come to help James during the week. Marilyn Whall and Michael Wheeler are considered a pair of Australia’s best mediums. They were so kind, gracious, and uplifting. I was talking with Marilyn on Monday about how long I had been developing and she encouraged me to do the group demonstration later in the week (and how she never dreamed she would be where she was today just 3 or 4 years ago, telling me what the possibilities were). I got to see her in action during an exercise with a development circle – she was absolutely incredible. And then Michael did his own group demonstration that was equally impressive. To receive such encouragement and praise from seasoned and recognized professionals has been an amazing blessing.

Of course, being part of a large group and interacting with so many different people (especially within the subject matter of mediumship) creates an amazing bond between all who participated. For one week, my wife and I were part of an incredible spiritual family that witnessed miracles between so many. We have been so honored to have been asked to remain in contact with several of them.

Spending a week in devotion to spirit and seeing several spirits come through so astonishingly is an incredible wake-up call to what’s possible with this work - and life in general.

When we finally arrived back in Seattle last Saturday, our hearts literally sank. We weren’t ready to return to “normal” life (at least as normal as we get). James really opened everyone’s eyes to what living daily in the presence of spirit can accomplish.

Of course, he gave several mediumship demonstrations himself, inspiring us all to our possibilities. He said it so eloquently when he told us as mediums we were all “Ambassadors of Spirit.” He revealed that the ability to serve humanity from working with the realm of spirit and living fully in communion with it was not just wishful thinking, it could become a reality (with enough practice and commitment).

As a final exercise on Friday, he chose people from the audience to sit in the center of the room with a blindfold on, then grabbed another participant from the group to come and stand behind them. The blindfolded participant needed to use their psychic abilities to describe whoever was standing behind them. For me, that was the scariest exercise to do in front of the group. I felt like young Anakin Skywalker being tested by the Jedi council. I mean, here you are in front of a hundred people, blindfolded – completely in the dark visually – being asked to describe someone standing behind you … Male or female, a few physical characteristics, personality, whatever came up. All I had to go on was what my inner senses told me. As I always say, no psychic is ever 100% accurate – but what a relief when James revealed I was 98% correct! Whew!

The week was truly amazing. It revealed, without a doubt, that everybody has psychic abilities to one degree or another, and with practice can become very adept at using them. There were many smiles and many tears, as we were all touched by the loving realms of spirit. 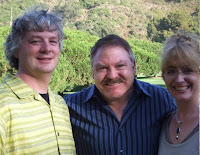 Posted by Jeffrey Marks at 7:43 PM